The timeline below shows a few dates for the development of boat propulsion, also includes other related events which led to the Thames becoming, the world centre for marine technology during the 19th century.

James Watt develops the steam engine with the invention and patenting of the condenser.

1800 Richard Trevithick introduced the use of high pressure steam.

Richard Trevithick introduced the use of high pressure steam at a Cornish mine. Pressure was around 40 psi; about ten times the pressure used in Watt engines. High pressure steam engines were lighter so could be used for all forms of mechanised transport unlike the massive James Watt beam engines.

Charlotte Dundas built by William Symington for towing work on the Forth & Clyde Canal. 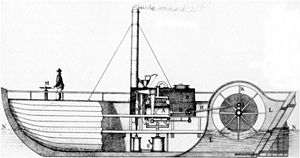 Until this time the Thames was tidal up to Staines. Each lock built lower downriver needed an act of Parliament. The new locks now made the river non tidal above Teddington.

In 1812 Henry Bell commissioned his steam-boat the Comet, of 30 tons displacement, with an engine of three horsepower. The Comet, named after a great comet which had been visible for several months in 1811-12, was constructed by Messrs John Wood and Co.

In August 1814 Bell advertised a passenger service on the Comet between Glasgow, Greenock and Helensburgh three times a week, returning on alternate days. 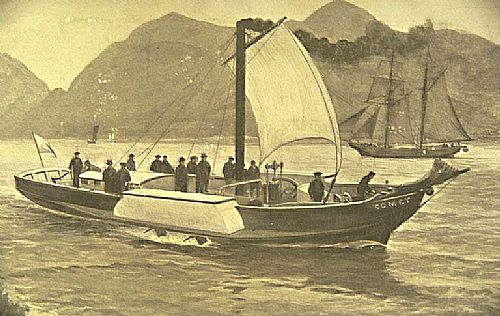 1815 PS Margery - First use of a steamboat on the Thames

PS Margery - First use of a steamboat on the Thames between London and Gravesend. PS Richmond may have started taking passengers in 1813

The screw Propeller was patented by Francis Pettit Smith in 1835. However there is a great deal on controversy over who actually invented the propeller. In truth the idea had been around for centuries and the advent of steam propulsion renewed interest at around the same time from a number of people. These include James Steadman, Robert Wilson and Richard Jordan Gatling.

1837 Queen Victoria accession to the throne

Queen Victoria accession to the throne.

1839 SS Archimedes - first successful use of a propeller

SS Archimedes - Built on the Thames in London was the first successful use of a propeller instead of the paddle wheel. Circumnavigated the UK in 1840; influenced Isambard Brunel to use screw rather than paddle for the SS Great Britain. 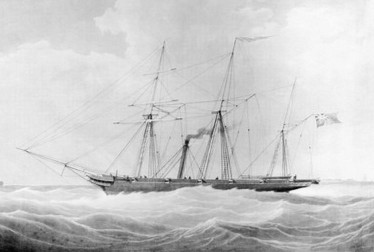 HMS Rattler - built at Sheerness was the first naval ship fitted with a propeller. There were a series of trials; screw versus paddle, the screw always proved superior in pull and speed. 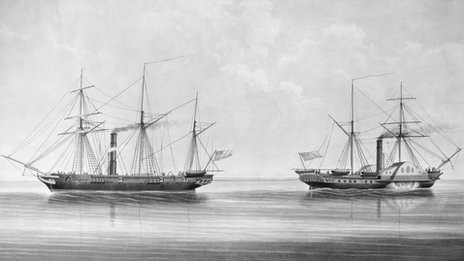 Most famous against paddler HMS Alecto in 1845.

Thames Conservancy assumes responsibility for the river navigation from Lechlade to Teddington.

Cygnet - built by J.I. Thornycroft at Chiswick; yard no. 9

Miranda - built by Thornycroft, yard no.10 astonishes naval experts with a speed in excess of 18 knots. A paper was given to the Institute of Naval Architects by Professor Bramwell

1871 first use of a steam launch the Henley Royal Regatta

Thought to be first use of a steam launch to carry umpires at the Henley Royal Regatta, possibly using Thornycroft steam launch Ariel

Restored to full working order, now on display as a static exhibit at the Henley River and Rowing Museum. 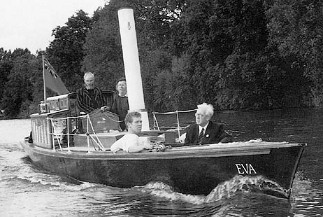 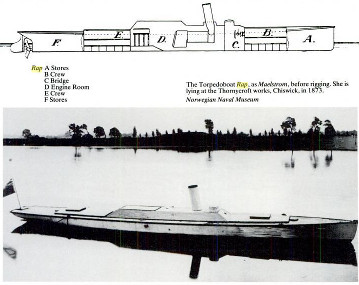 On display at a Museum in Norway.

G.F.G. Desvignes built the umpire launches for the Henley Royal Regatta for the next 20 years

Otto patented the four stroke engine principle which lead to the development of the successful Internal Combustion engine, by others.

1876 Lightning - first torpedo boat built by Thornycroft for the Admiralty 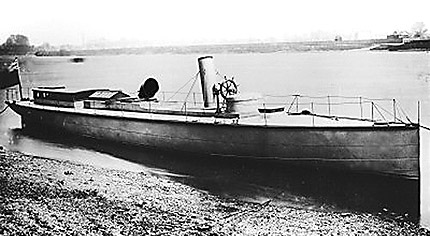 1882 Electricity - the first electric launch on the Thames

Electricity - the first electric launch on the Thames.

Yarrow patented a three drum design watertube boiler. Lighter water tube boilers were now being use in naval vessels instead of the heavier loco types.

Moritz Immisch employed Magnus Volk as manager to develop an electric launch hire business based at Platts Ayot. Steam dynamo stations were set up on barges at various locations on the Thames for re-charging batteries.

Hibernia - at 28 mph was fastest steam launch on the Thames, built by G.F.G. Desvignes for umpire use.

Daring (immediately below), Decoy, Havock (below) and Hornet were the first of a new class of warship called torpedo boat destroyer commissioned by the Admiralty from Thornycroft and Yarrow respectively at their Thames yards. 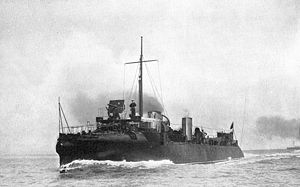 To fit under London’s bridges, masts and funnels had to be removed and replaced downriver and Greenhithe, near Dartford. The picture above shows the launch of HMS Speedy in May, 1893

1893 Lodona - built for Mr Palmer of Huntley and Palmers

Lodona - built by Kingdon Yacht, Launch and Engineering Co. Ltd (G.F.G Desvignes) for Mr Palmer of Huntley and Palmers of Reading. 1923 purchase by the Thames Conservancy renamed Donola used as inspection launch until 1969.

On static display at the Museum of Discovery Newcastle upon Tyne.

Restored 2001 and now operational on the Thames each year. 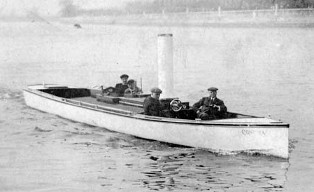 1904 Saunders moves to the Isle of Wight

Saunders sets up the syndicate and moves to the IoW to exploit the use of Consuta plywood. Springfield works at Goring sold to Hobbs c1908.

Woolston yard closed in 2002. Thornycroft became Vosper Thornycroft in 1970 based at Portsmouth, now known as VT.